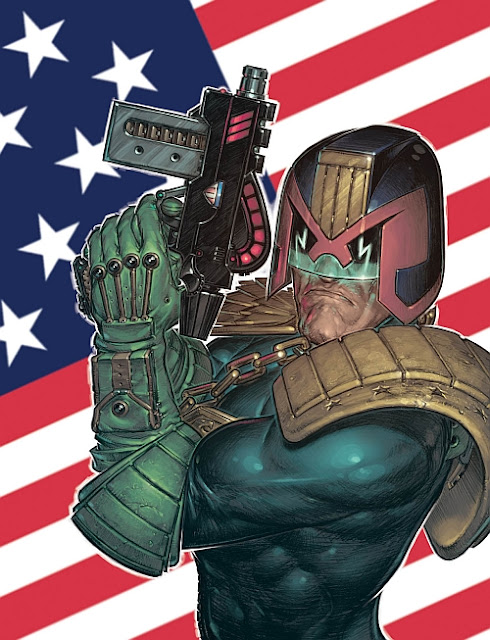 1) What was your first published work?

My first published comics work was a Future Shock for 2000AD titled 'Home From the War' written by Steve Moore in the year 2000. 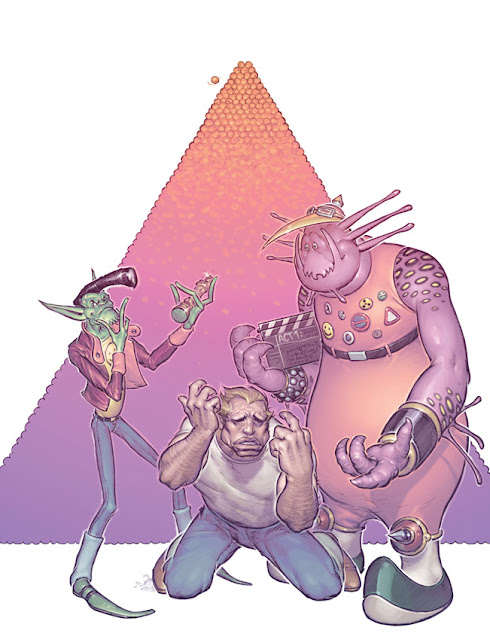 2) Who or what inspires you?
The first answer that sprang to mind was 'the human race'. A broad answer for sure, but I care about humans, I am fascinated by them from the ancient past to the present, and I really want us to migrate into space before we arse things up completely. I believe that working positively in comics and sci-fi will hopefully feed into that goal, albeit infinitesimally… also, within the human race there have been such people as Moebius, Jack Kirby, Brendan McCarthy, Brian Bolland, Jose Ladronn, Frank Quitely, and Carlos Ezquerra to name a small few who have had a more direct influence on me. 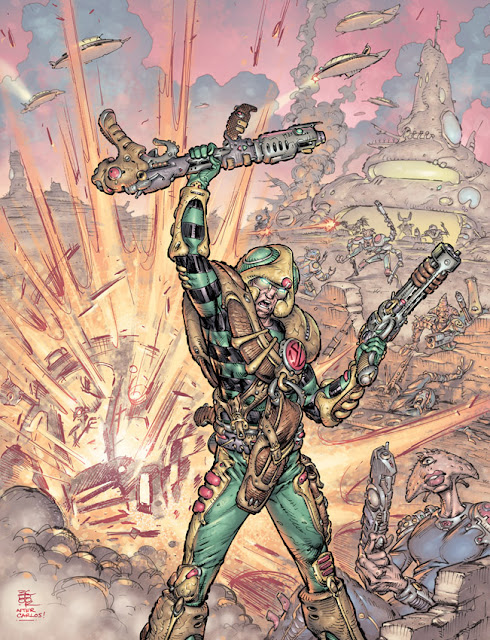 3) What would be your dream job to illustrate?
I've been lucky enough to have a pop at a few 'dream jobs' already, such as Judges Dredd and Anderson, and recently Strontium Dog/Johnny Alpha for which I am massively grateful - any of the other main 2000AD characters would be great to have a go at, perhaps something mental like Nemesis! I've always loved my heavy hitters so it would be great to try on the Hulk or The Thing for size at some point. Aside from that a BIG dream job would be to write and draw some of my own characters and have them become successful. 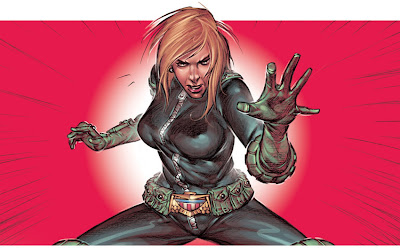 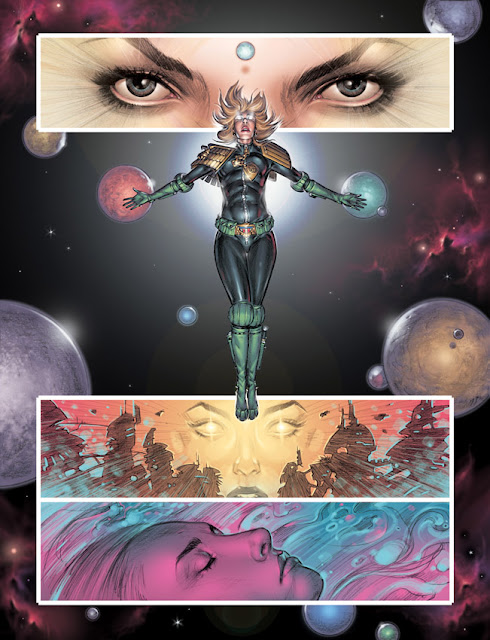 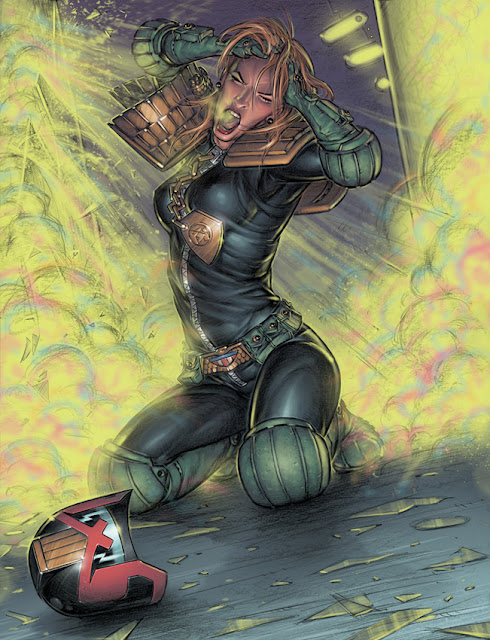 Okay… first up: DREDD! I will never tire of Dredding, having been a massive fan since I was 10, and I think this cover is probably the most eye catching that I've done of Old Stoney Face.

Next is D.R. and Quinch - This was done for a 2000AD special feature where art droids get to pick a few moments from 2000AD history that stuck in our minds the most, and revisit them in our own style - this one kinda speaks for itself: 'mind the oranges Marlon!' I also drew the moment where Dredd shoots himself live on Sov tv from the Apocalypse War.

The next one is a pretty recent 2000AD cover for Strontium Dog - A straight homage to Carlos Ezquerra's original cover from prog 220's Portrait of a Mutant story. Since I was a kid Johnny Alpha has always been my favourite comic character - I always read Dredd last in the weekly prog unless Johnny is in there, and he gets the hallowed spot. So when I got asked to do this cover, and also recently an Elephantmen/Strontium Dog crossover strip for the Thought Bubble anthology comic it was pretty much a dream come true and it made me do my Native American style happy dance, just the same as when I got my first future shock. For me anyway, when drawing an iconic character like Johnny who is synonymous with one main artist, to capture the soul of that character you have to channel the spirit of that artist too (in this case Carlos) and I make no bones about plagiarising some of Carlos' trademark inking idiosyncrasies when I'm (Strontium) Dogging.

Judge Anderson, PSI - Here's 3 of my favourite images of Cass from my run the strip. First of all can I say a massive thank you to my long suffering wife, muse and reference model Gemma who's fine posing is exemplified in this first single panel where I wanted to capture the spirit of that iconic 'I'm with Rowdy Yates Block - who you fighting with?!' Dredd image by Bolland in Block Mania. Page 6 of Anderson strip 'the Trip' part 2 was really great fun, although I possibly got more caught up in painting the wee nebulas and planets than anything else. Page 7 was one of the few splash pages I got to draw/paint - if I had my way, every panel would be a splash page! 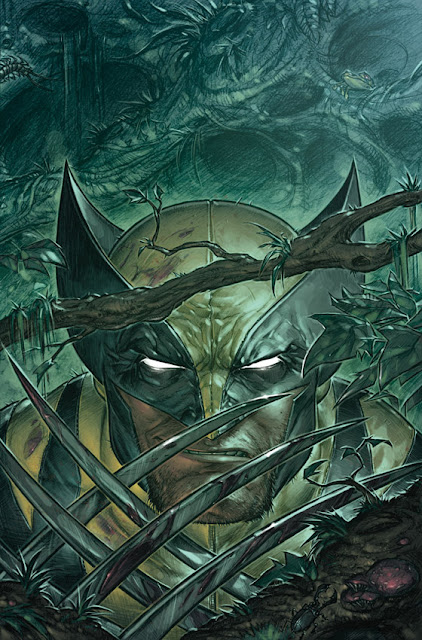 Wolverine - I haven't done many covers for Marvel, but without a doubt the best fun I had there was on this cover for one-shot 'Dangerous Games' written by 2000AD's own Si Spurrier. He pretty much got my foot in the door there until the door finally squeezed harder and harder on my foot, my toes burst off and the door closed. (Although maybe not for good… we'll see…) 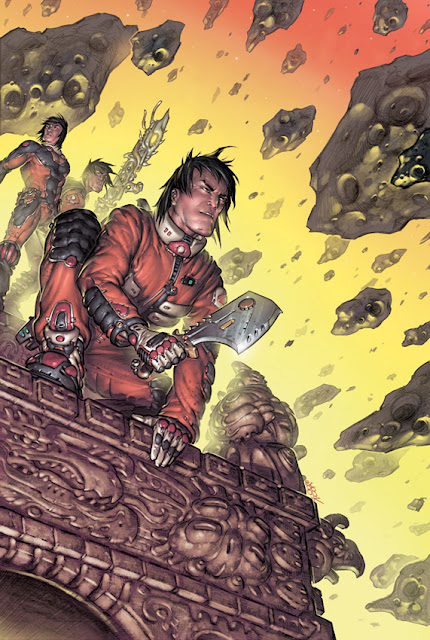 Prophet - this was a cover for Brandon Graham and Simon Roy's massively and expertly revamped Rob Liefield character (John) Prophet. Easily one of the best comics to hit the stands last year, so a great buzz for me to work on. I really tried to channel something of a classic 70's sci-fi feel with this one. 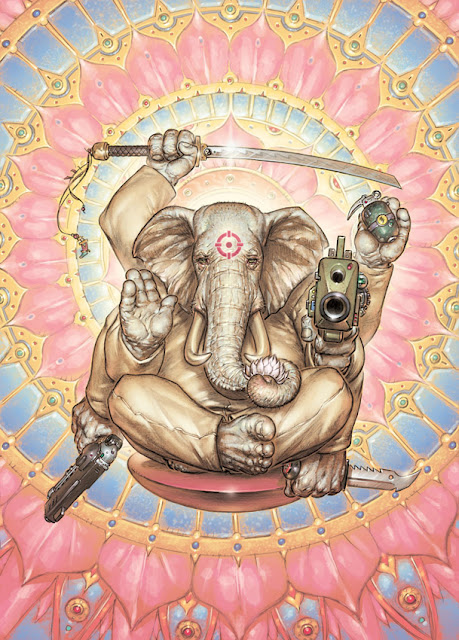 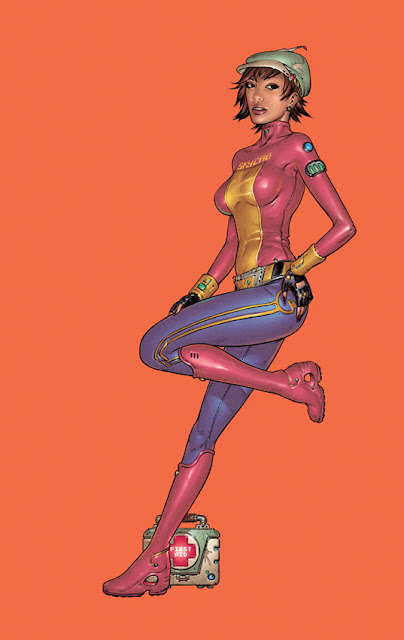 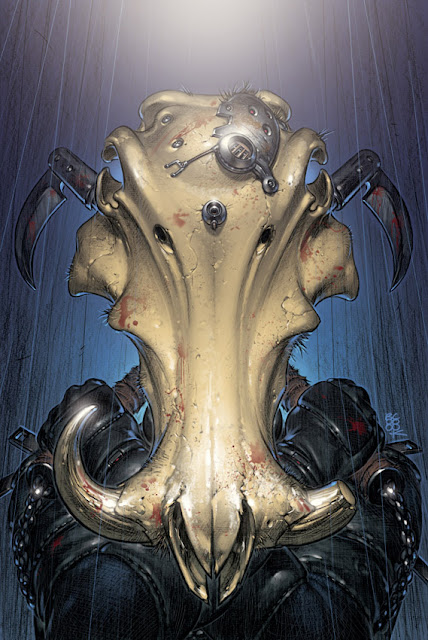 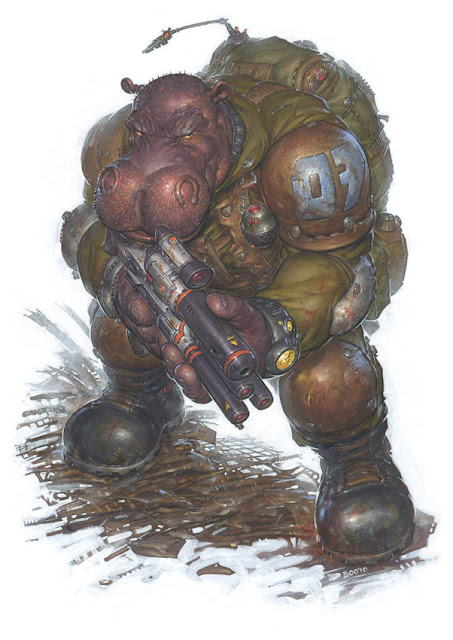 A selection of my favourite Elephantmen comic pieces next - First up, the cover to the forthcoming issue #48. This features Buddhist elephantman 'Gabbatha' in what was a refreshingly simple cover, with obvious nods to Buddhist and Hindu iconography as well as a wee bit of Bladerunner. All the collected editions of Elephantmen have a female character on the back - this next pic is Miki in a nice friendly pose that I have a soft spot for, for some reason. The next cover features vigilante character 'Razorback' with her dead warthog elephantman skull mask. Writer Richard Starkings and I conjured up this character while looking through some old sketchbooks from when I was 16 and there were drawings of warthogs for the band I was in at the time called the Razorbacks. Next is a one-off image of Hip Flask in his army gear - this was for Image comics yearbook 2010 and I hadn't painted anything with 'real' paints for years so used this as an opportunity to get back in the flow with acrylics again - damn good fun. 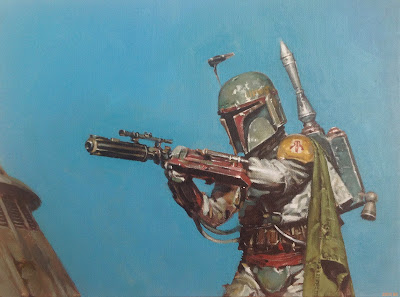 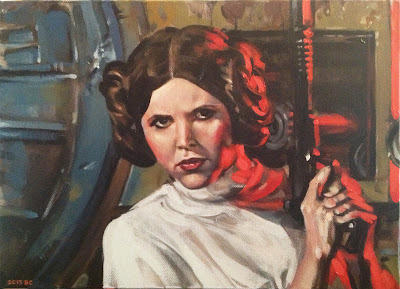 Next is a selection of images from the random file: having got back into proper painting again I recently cranked out these 2 Star Wars images on canvas for friend's birthday gifts - my painter pal Daz has a daughter named Leia, so naturally that painting went to him on his 40th and Boba was for Gemma and also really enjoyable to do, getting nice and gestural with the paint after years spent in the anal realm of photoshop. The 'Judge With No Name' Clint Eastwood piece was for Lille comic festival to sell as a fund raising print. They had a theme of 'western parodies' so my reasoning behind it was that Dredd was always meant to be based on Clint, and if he ever took the long walk into the cursed earth he might well lose his helmet. Now in my humble opinion, Dredd wouldn't keep his helmet on constantly because he doesn't want people to see his face, it's because he's a total stickler for the law and his anonymity is a by product of that. If he did lose his helmet in the Cursed Earth then he would probably look a little like this, but I kept the badge slightly obscured to retain a modicum of subtlety… The last image is a concept piece of character Lucy Ferrin for a strip called BLUNT which writer Tom Eglington and I have been pitching. I grabbed the pose from a picture of a ballet dancer in national geographic and just really wanted to see how she would look relocated into a sandy sci-fi (my favourite of the sci-fi's) setting and it ended up being quite different to my usual stuff. 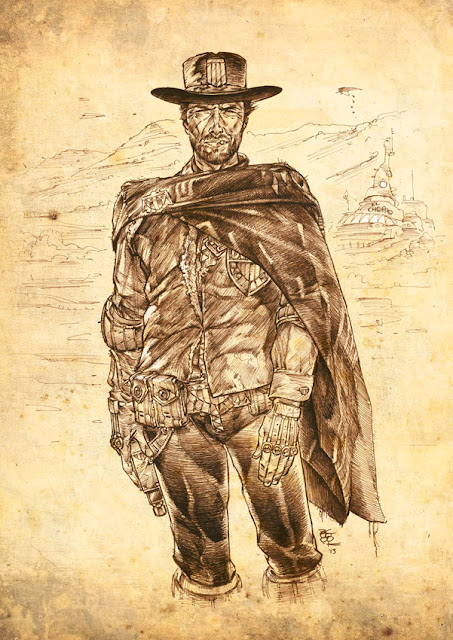 5) What can we expect to see from you next (what are you working on)?
My very next gigs are a run of covers for Elephantmen and a Dredd strip called Downside written by Tom Eglington. Tom is a great writer and good friend of mine and we love working together - watch out for recently completed strips 'Gunheadz' a 3 part 3Riller for 2000AD and a one off strip called Gamma Tan for the Dredd Megazine, we are currently rustling up several more pitches for bigger projects, possibly further afield… Also I'm doing some writing myself which I'm just shaping up pitches for - it's tricky finding the extra curricular time to get these projects off the ground but it's something I really enjoy so one day something should see the light, Grud willing. 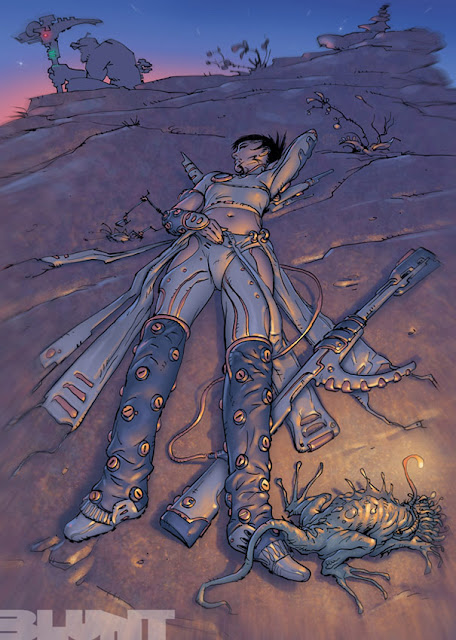 6) If you hadn't become an artist what do you think you'd have ended up doing?
Probably music. My main instrument is the drums, but I can play just about enough of various other things to get tunes together on home recording equipment. I was in various bands between the ages of 16 to 28 but it got too much hassle so I opted for comics instead. Since then I've done bits and bobs under the solo monikers of Mezzcode and Owlmask, but have recently had the great pleasure to get back into a band proper called Motherbox, with 2 synth players Jon Ridley and Oli Bailey and myself on drums – it's a radical new approach for an old funk/punk/rocker like myself but I'm really enjoying it. It's taking a long time to get anything serious off the ground as we all now have the various life commitments that come with being a 'grown up', but we're getting there… if I couldn't do that or art, definitely writing!

7) Where can we see more of your work (web links)?


Here's some links to more art: