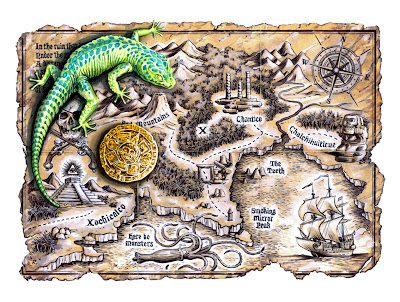 I've often quickly sketched something onto the outside of an envelope and stuck it in the post but I've never done a finished illustration stuck a stamp on it and hoped it gets to its destination in one hopefully fine piece, however having been invited to take part in the third Mail Me Art project that is exactly what I had to do.

Mail Me Art was started by Darren Di Lieto of The Little Chimp Society back in 2006, he invited artists from all over the World to create unique pieces of art on envelopes and post them off. A bit of a risk you may think and yes it is, trusting that the weather, postal services and the postman take care of these unique items but then again they are just envelopes. As the instructions sent out by Darren stated: 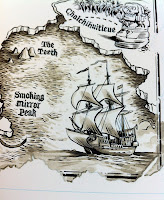 Take it to the post office, buy some stamps, stick them to the top-right of the back of the envelope (the side with the address). It can be first or second class post, but do not send it recorded or signed for. Also at this point it has no value and is just a very nice envelope and not a piece of Art. If you have to fill in a customs form, please put zero value. Do not wrap your mail art in another envelope and do not worry about any damage or scratches that may occur while the work is in transit. We want you to send it as-is. In the past, some work has been damaged, drawn on by the post office workers or not even made it to the destination, but this is a risk we hope you're willing to take.

I had several ideas in mind that would have suited this project but I wanted to produce something that would appeal to a larger audience and I believe there are not many people who don't enjoy checking out a treasure map. Having to send the original piece through the post I knew I wanted to try and make sure that the materials I used would be waterproof giving the illustration a fighting chance if it encountered rain on its journey and I also wanted to return to using 'real' (no digital) paints and brushes as it had been some time since I had used them. I also quickly decided to make the envelope myself and therefore could use a preferred stock of paper for the work, much easier when you know how a surface normally reacts than trying an untested bought envelope for the first time.

And then it was time to enjoy myself! A C5 envelope is quite small so the drawing area (229mm wide by 162mm high) was pretty restrictive but I still wanted to pack a lot detail in. The map was inked with my trusted brush pen and then tone was added with Copic markers and some acrylic inks. The golden coin and gecko where done entirely in acrylic paints and as usual when working with paints again I set myself the promise of returning to the medium soon as I always enjoy the process. A few tweaks here and there and the illustration was finished and scanned in, then the paper cut from the board and transformed into an envelope (my many years of producing 'mock ups' for printers always a help). Then my brush pen came out again to add the relevant address details to the other side with an 'X' marks the spot for good luck, on with a stamp and into the post box!

Having scanned in the image I couldn't help myself from doing a 'remastered' digital version, where I tidied up a few elements, adjusted the overall colouring of the map and added in some crease lines that I had intended to add on the original but had completely failed to do. Now all I have to do is await an email from Darren telling me the envelope has arrived and what state it has made it in, fingers crossed. Later in the year all the work posted off will be on show at a few exhibitions and you'll be able to purchase the accompanying book to the project, I will keep you informed of details and also check out the website for updates at: http://www.mailmeart.com/
Posted by Graeme Neil Reid at 8:00 AM