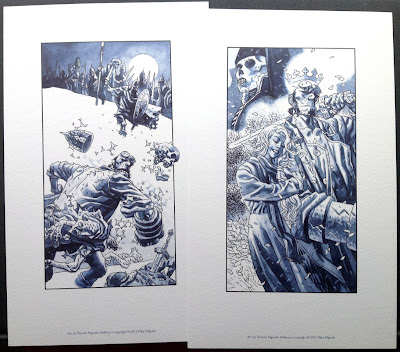 1) What was your first published work?
I believe that would be a number of illustrations for sci-fi anthology magazine Interzone. I'd been showing samples of my degree show project, an adaptation of Milton's Paradise Lost at the Watchmen signing in Odyssey 7 in Leeds, and one of the editors of the magazine also happened to be attending. Oddly enough he turned out to live around the corner from me. First comics work printed was Repossession Blues, written by Dave Thorpe it was a tabloid sized 8 pager folded into style magazine Heartbreak Hotel. It was as big as it was bloody awful! My first brush with the mainstream was a pinup of Judge Dredd that appeared on the back cover of one of those Best of 2000AD / Judge Dredd magazines, it was actually a sample I'd shown to Fleetway and the first I knew about it being used was seeing it on the news stands, a nice surprise.

2) Who or what inspires you?
Great art and storytelling of any kind excites me. I really try to keep hold of the memory of reading/watching/playing great work like Halo Jones, Star Wars, Batman Year One, Pulp Fiction, Ico and pretty much all of Hellboy for the first time, that rush of euphoria/holy crap/omigawd that tells you your mind is blown and your world is the better for it, I want to invoke those same reactions/emotions in others. Aim high. I also see a lot of fantastic work via Twitter, its a terrific way to see new work by artists you admire and even better to be able to tell them how great it is, to spread the word. 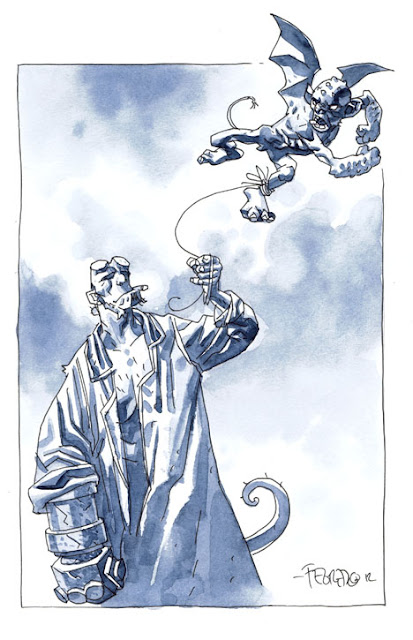 3) What would be your dream job to illustrate?
I'm pretty lucky in that I've already illustrated my dream job! I mean Hellboy of course, I'm not convinced how successful I was but I at least gave it my all. Mike Mignola was happy so I can't have screwed up too badly, it's as much as I could hope for. What else? I had a good experience storyboarding a big movie recently, I'd like to do more of that for sure. I'd like to draw my own book, as soon as I get off of my ass and write it, obviously… I think I would draw a kick ass version of Harry Potter but that also sounds like a huge undertaking, the kind of thing that would pull you under. Be careful what you wish for I think…

4) Tell us a bit about the illustration(s) you've sent?
The two images together were drawn for the fifth Hellboy Library edition, it collects the first two volumes of my work on Hellboy and has a huge sketchbook section. These two images in particular accompany Scott Allie's introduction and Mike Mignola's afterword respectively. I decided they'd make a nice set of prints which are available to purchase at my online store http://www.duncanfegredo.co.uk/. The other two pieces are drawn in a similar style, inked line and watercolour tone, they are the sort of thing I do when I grind to a halt on the sequential pages, a bit of fun really. I'll be collecting up a stack of these images for a sketchbook in the near future, I'll announce availability via Twitter. 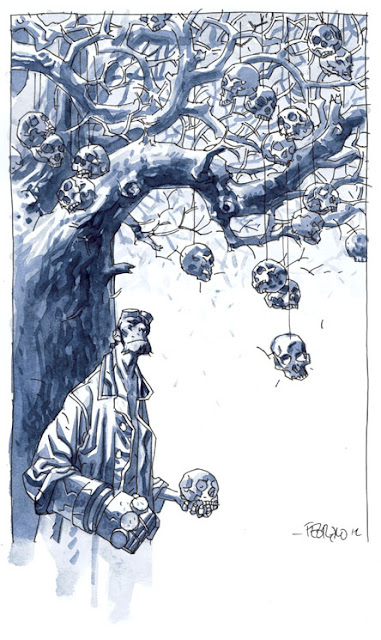 5) What can we expect to see from you next (what are you working on)?
Hellboy: The Midnight Circus, a 49 page one shot hardcover set in 1948, Hellboy Jr runs away to the circus and stuff occurs along the way. There, no spoilers. Beyond that, the movie I story boarded will be out 2014 so don't hold your breath!

6) If you hadn't become an artist what do you think you'd have ended up doing?
I really can't imagine, I figure I'd still be making shit up one way or another, is pathological liar a job? Maybe not… I wanted to be a spaceman when I was a kid but colour blind asthmatic spacemen are rare so still no really. Besides, I'm a crap traveller.

7) Where can we see more of your work (web links)?
www.duncanfegredo.co.uk where you can buy prints and original art and you can find me on Twitter as @duncanfegredo, I talk a lot of crap and from time to time tweet doodles and my rough layouts for Hellboy. The layouts are all collected at http://storify.com/DuncanFegredo
Posted by Graeme Neil Reid at 8:00 AM