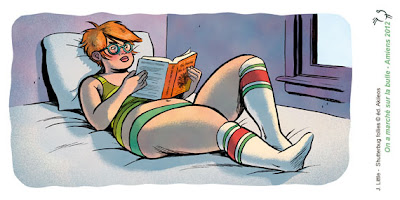 1) What was your first published work?
My first comic book was Jack's Luck Runs Out, self-published with financial support from the Xeric Foundation. It was a story about a gambler in Las Vegas, with a cast limited to the twelve faces from the standard pack of playing cards. Color and perspective were similarly constrained to the aesthetics of the U.S. Playing Card Company.

2) Who or what inspires you?
These days I'm inspired by French comics. My stack of books that came back with me from a festival in Amiens includes work by Blutch, Huebert & Kerascoet, Manuele Fior, Mathieu Sapin, and Guerse & Pichelin. I've also been reading some good nonfiction about scientific topics: Carl Sagan, Brian Greene, Gary Zukav, Aldous Huxley, and Steven Pinker.

3) What would be your dream job to illustrate?
I'd love to write and draw a collection of short anaglyph 3d comics. Each story could exploit a different approach to 3d: diorama, stereo photographs, lineart, sculpture, etc.

4) Tell us a bit about the illustration(s) you've sent?
The illustration at the top of the post is a bookplate I did for the Amiens Festival in France, featuring my recurring protagonist, Bee. 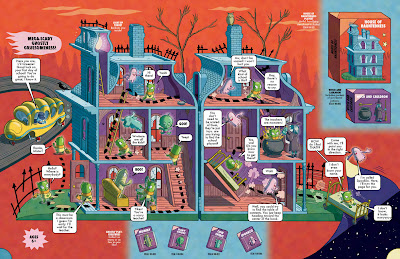 This is from a proposed children's "graphic novel" with Nick Bertozzi. He is writing and drawing layouts, and I do the finishes. 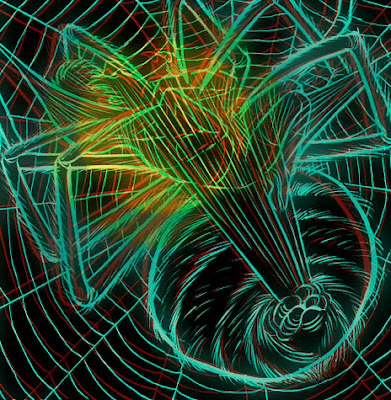 This is a panel from a 3d story called "Selbstbildnis Walpurgisnacht Bildungsroman". It's presently unpublished, but I've performed it as a 3d slide show a few times.

5) What can we expect to see from you next (what are you working on)?
I'm presently writing The Secret of the Ivory Tower, the third in my series of "Bee" graphic novels.

6) If you hadn't become an artist what do you think you'd have ended up doing?
If I could have another life, I would probably compose music. I also often fantasize about making pornographic art films. Sometimes I fantasize about being an architect.