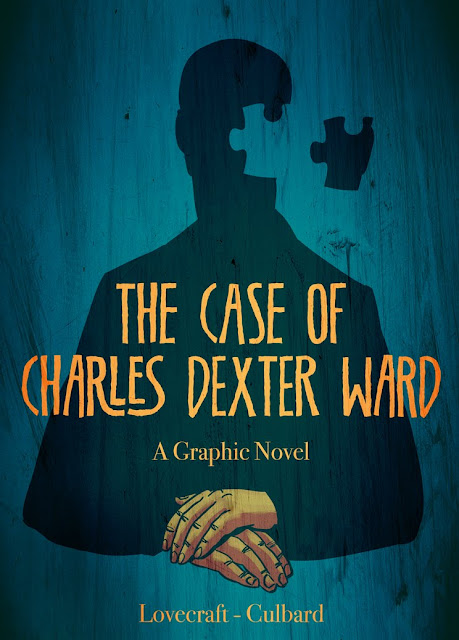 1) What was your first published work?
Well, I suppose things really started happening for me in comics when Dark Horse printed two of my stories in their New Recruits anthology in 2006… Very shortly after that I was in the Judge Dredd Megazine with a 6 page short called Monsters… but before that, going back, waaay back… if we're talking 'first published' then I'm going to talk about self publishing and a comic I wrote and drew in 1998 called Side-Show.

I managed to sell 10 copies of the first issue at Gosh. I can safely say it sold out because I only printed 10 copies. It was a 36 page book written and drawn over two days and then photocopied and stapled together while I was working at Passion Pictures in London. I did it as an attempt to conquer my fear of the empty page by just going for it.  I drew 4 issues in all but I only ever printed 10 copies of issue 1 so… lost to history. But it was cathartic. I did get something out of doing it. Its like all things, you should really do them for yourself. Otherwise you're just wasting everybody's time, including your own and life is short.

4) Tell us a bit about the illustration(s) you've sent?
The first is the cover to Charles Dexter Ward which I adapted for SelfMadeHero and is out now. I picked this because its quite different from what I usually draw inside and the bulk of my work generally. Its just straight up illustration work as apposed to comics work. In contrast to my previous Lovecraft adaptation 'At the Mountains of Madness' which was an exploration story, this was more of a detective story. The covers are the very first thing I do (I actually have the cover for the next book ready). Its all become a bit of a ritual. Once I have the cover I then sit down and write the book to go with it. 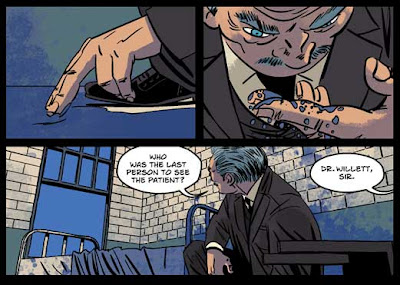 No idea why it works this way it just does so I'm not going to question it.

The next image is the cover to the final installment of the 8 part mini-series Dan Abnett and I have been working on for Vertigo, The New Deadwardians. The covers for these have been a lot of fun to do. The whole series has been a lot of fun to do. I have absolutely loved working with Dan. He's fantastic and the scripts have been superb. We've been talking about doing a lot more besides so watch this space. Not only that but working with Patricia Mulvihill who colored the interior art and Travis Lanham who lettered the book - that has been just amazing. These are two jobs I've always done myself up till now so to have a team of talented people to work with has been truly great. It has made me look at my work completely differently and I've learned a heck of a lot from the process. 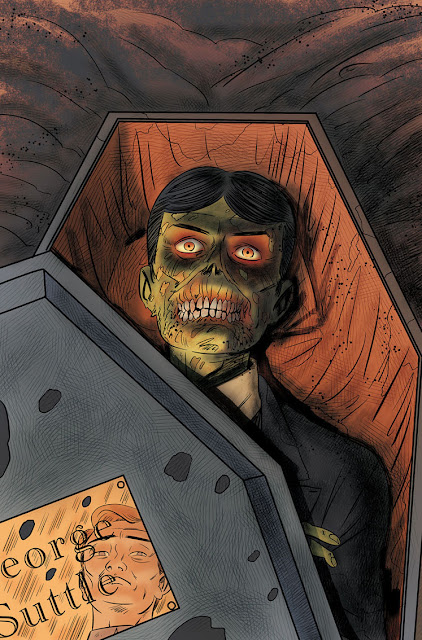 The covers for The New Deadwardians are all done months ahead of drawing the actual issue so I just had the synopsis at that stage to work from. Consequently they're quite loose and illustrative interpretations. Also, because they're in Previews, I aim to not telegraph the plot. 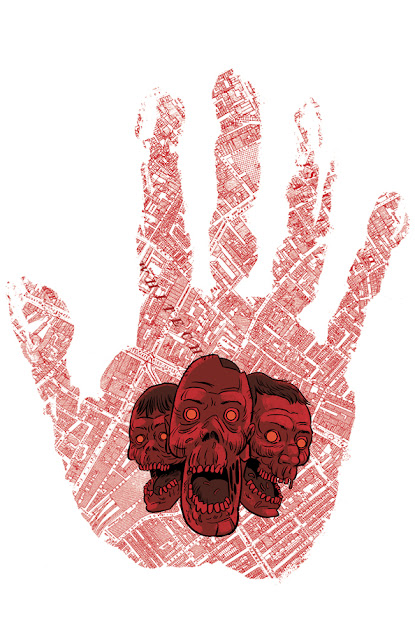 Here also is the cover to issue 2 of The New Deadwardians. I remember the moment when the idea clicked, when I saw how Whitechapel High street and Commercial Road met at a junction like the life and head lines on your palm. And the other thing I'm pleased about is that the cover print is actually my hand and its to scale. It printed the same size as my hand (and I have big hands), so I can press my hand onto the cover of issue 2 and it fits perfectly. Loved doing that one. That's a cover that's somewhere between the kind of covers I've done for Vertigo and the covers I've done for my Lovecraft books at SelfMadeHero.

5) What can we expect to see from you next (what are you working on)?
Well, I'm working on Deadbeats with Chris Lackey and Chad Fifer and that will be out from SelfMadeHero in the autumn. This September I'm going to be in 2000AD for the 12 part Brass Sun written by Ian Edginton and there's also the conclusion of The New Deadwardians fast approaching (well, for me anyway as I'm issues ahead of anyone reading it) and that's an 8 part series with Dan Abnett. And then next year there will be another Lovecraft adaptation from me and more besides.

6) If you hadn't become an artist what do you think you'd have ended up doing?
I wanted to be a stuntman or a fireman. I would have probably ended up running into burning buildings one way or another so I'm kind of glad I took the writer/artist route instead.

7) Where can we see more of your work (web links)?
http://www.strangeplanetstories.blogspot.co.uk/
Posted by Graeme Neil Reid at 8:00 AM