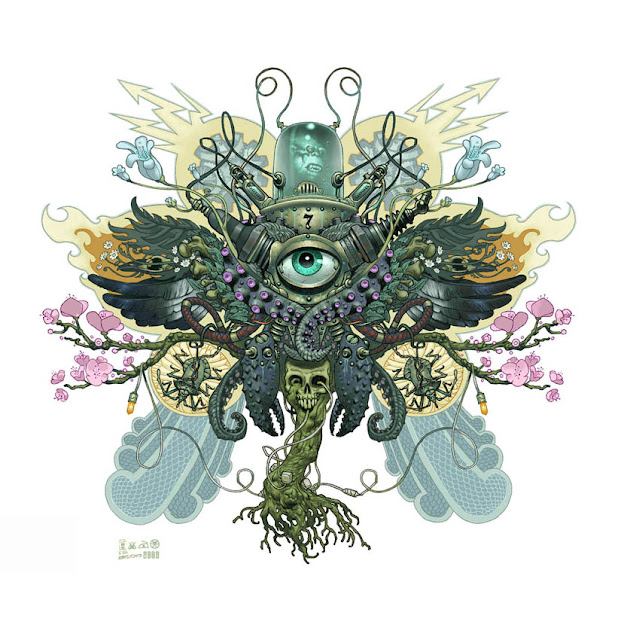 1) What was your first published work?
That's difficult, I'm not entirely sure. I'd been working as an illustrator/artist for years before I had anything published as such. There were bits of advertising work, for Mars bars and that sort of thing, and a few record covers in the early nineties, But I think the first published piece for me would be for INFERNO magazine, published about 2000. This is significant because I'd decided to take my work more seriously, and myself less so. I was also starting to work on projects I was genuinely interested in. The Games Workshop was something I loved as a kid, so I knew I could get some work with them as I was fairly familiar with their stuff. In fact I used to bunk off school and catch the train to London to visit the first ever Games Workshop... there was no Warhammer then. It was just a games shop, I used to like the miniatures. Yea, o.k. that's pretty lame... but I was smoking fags and drinking cider too, honest.

2) Who or what inspires you?
I am inspired by so many things, maybe I'm just fickle or have been driven insane by spending too much time locked in my studio... my studio is packed with books, films, comics, toys, art, bones, and stuff of all sorts that I've collected. This place has probably become a filter to the outside world. I find most inspiration becomes clear from walking in woods and fields where I live. Some of the strangest inspiration comes from listening to ska music whilst driving, and I mean the original 50's-60's ska. For some reason it seems wholly inappropriate in almost all situations, like Daleks or nuns... what the f**k am I talking about?!
Artists I am inspired by are also too numerous to mention, so here's a short list: Moebius, Juan Gimenez, Enki Bilal, Kev Walker, Mick McMahon, Mike Mignola, Guy Davis, Fegredo, Bisley, Frazzeta, Alan Lee, Arthur Rackham, Edmund Dulac, Aubrey Beardsly, Gustave Dore, Chris Ware, Jim Woodring, Dave Cooper... and a million others. See... just fickle... I feel like a tart listing artists like that.

3) What would be your dream job to illustrate?
Hmmm. The Gormenghast trilogy by Mervyn Peak.

4) Tell us a bit about the illustration you've sent?
The first Illustration is 'BEHOLD, THE EYE!' which is something I'd like to do more of. Maybe it's a cathartic process, trying to filter out the monkey gibber and tentacles that CLOUD MY EVERY WAKING MOMENT.... AAAaaAAAgh.... and so-on. 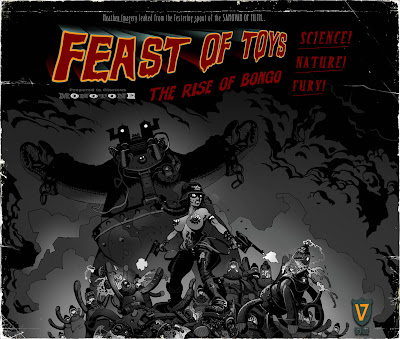 The second is FEAST OF TOYS which is part of a series I've been working on for a while now. Basically it's a title under which I'm trying to produce a series of stories and artwork based in a world irrevocably altered by a series of ridiculous and rather steampunk experiments.

The third is TRACTOR GIRLS which is quite old now, but it was a portfolio piece and one of the first pieces I did in [mostly] monotone.

5) What can we expect to see from you next (what are you working on)?
The next thing you'll see is a 2000AD cover, which actually I'm not happy with. But it's o.k. Will do better next time. 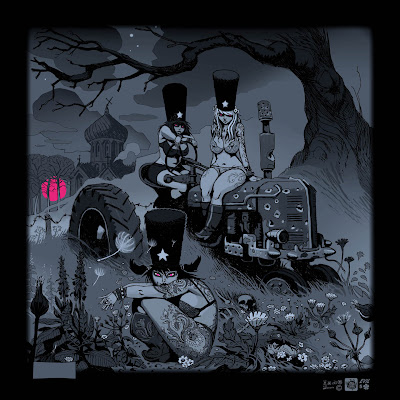 6) If you hadn't become an artist what do you think you'd have ended up doing?
Digging holes probably.

7) Where can we see more of your work (web links)?
My website, http://tiernentrevallion.co.uk/, is woefully behind, at least a year in fact. I promise to sort that out soon, it needs trimming too. But that's probably the best place to see my work. Also Mark Cardwell is always decent enough to post my work up on his blog site over at badlibrarianship.
Posted by Graeme Neil Reid at 8:00 AM